The County Council awarded the contract to rebuild the path El Caminito del Rey to Construcciones Sando, building company from MÃlaga, for 2,244,101 euros

The start of the works is planned for March with a deadline 10 months from then, so the spot is likely to be opened at the beginning of 2015. 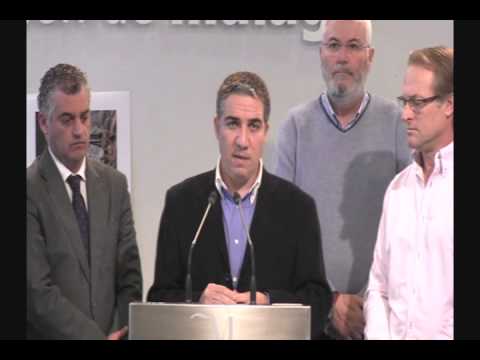 At todays general meeting, the MÃlaga County Council has decided to award the reconstruction of El Caminito del Rey to Construcciones Sando, a building company from MÃlaga, for 2,244,101 euros and with a ten months deadline. The works are to start in March and the opening is planned for the beginning of 2015.

County Council President ElŸas Bendodo informed about the results of the public tender called on 31st December, which was attended by ten companies. The offer received by the company Sando got the best mark (96. 75 points). The company fulfiled all the requirements in order to be officially awarded the contract.

The project includes the reconstruction of the whole trail, which is four kilometres long, and, above all, a 1.2 kilometres long hanging boardwalk, attached to the rock. This part of the route is going to be mended with the help of specialized mountaineers who can climb the gorge, and helicopters for moving building materials.

There have been many attempts to open this path that goes over the gorge  El Desfiladero de los Gaitanes, a marvelous beauty spot. Nevertheless, today, institutional co-operations and a good will allowed us to finally take this step. This is a historic day for the province because we are making approachable a top symbolic, tourist and environmental landmark, said the County Council President.

The general meeting united representatives of all the institutions which participated in project: Government Subdelegate in MÃlaga Jorge HernÃndez Mollar, Representative of the Environmental Department from the Andalusian Government Javier Carnero, and the Mayors of Ardales, êlora and Antequera  Juan Calderµn, Josõ SÃnchez and Manuel Barµn, who all signed with Mr Bendodo the manifest which should promote El Caminito del Rey and the surrounding areas.

According to this document, the parties involved promise to faithfully collaborate on the access infrastructure development and to plan construction of leisure, cultural and sport areas for visitors in order to promote research on this unique spot, improve its marketing and popularity. Actually, the County Council is going to invest 1m euros in the access road to El Chorro, a road widening, which is an important segment of the tourist approach to this new infrastructure.

Mr Bendodo called attention to the participation of Salvador Pendµn, previous president of the MÃlaga County Council President who also used to be the Mayor of Ardales, in the Caminito del Rey Project. Council President invited all the bodies which were represented today to continue with their cooperation in another projects and to do it more often.

In the same way, the Mayor of Ardales expressed that these administrations, governed by three different political parties, were capable of carrying out the project, aiming to satisfy interests of the province. The mayors of Antequera and êlora emphasized the same idea and they reminded that El Caminito del Rey is a nature wonder that will help towns to revive economy thanks to the active and inland tourism.

The representatives of the Central and the Andalusian Regional Government supported current and future projects. Governmental administration participated in issuing a report with the Railway Infrastructures Administration (ADIF) due to the connection between the path and the railway line El Chorro. On the other hand, the regional government is responsible for environmental issues.

The Towns of Ardales, êlora and Antequera approved the plan as compatible to their towns planning. Moreover, Ardales and êlora authorized building of paths with control cabins as access points (entrance and exit) to the beauty spot.

The new hanging boardwalk will be made of wooden panels and moorings which will be fixed onto the rock after it is drilled. Moreover, some sections will have glass floor so the visitors could see the gorge under them. Average altitude above the river is 100 metres.

This hanging path was built because the Hydroelectric Company El Chorro, needed an access way between the two precipices in order to make it easier for the maintenance workers to approach the zone and for materials transport. The works were started in 1901 and finished in 1905. The path was called after King Alfonso XIII who went along it in 1921 to officially open the Count of Guadalhorces Reservoir.

Architect Luis Machuca, in charge of the Architectural, Town Planning and Project Department of the County Council, is going to be a building manager, while Carlos Vasserot, Chief of Tourism and Territory Promotion Service, is going to be responsible for contracts control.