El Caminito del Rey Path is to be opened on March 28th and tickets can be booked on the web page www.caminitodelry.info from tomorrow on

Tickets are free but it is compulsory to book them. Six hundred tickets per day are to be printed for a full route, between King’s Chair and the train station, which is 8.5 kilometres long.

Mr Bendodo underlines that this is active tourism which has recovered an internationally famous attraction spot after having invested €5.5m. 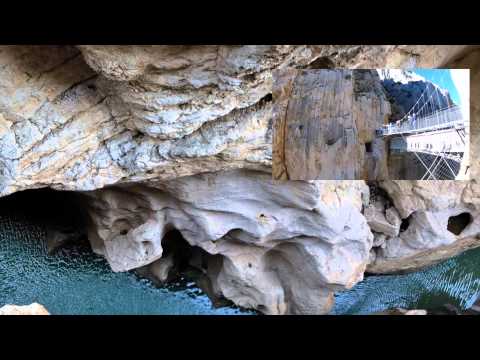 El Caminito del Rey is opening next Saturday, on March 28th, after it went through refurbishment process funded by the County Council of Mįlaga that gave €5.5m for the boardwalks and its surroundings. County Council President Elīas Bendodo have announced today that tomorrow, on February 24th, tickets will be available for booking. They are free, but compulsory to obtain at www.caminitodelrey.info.

This web page is available in Spanish, English, French and German. You can choose date and hour of the visit, as well as, the access route, which can be from Ardales or Įlora. Each user can obtain maximum 5 passes that will be valid for two months. Visits will be free while the county Council manages the trail, which will probably last for six months, and definitely not more than a year, Mr Bendodo assured.

Together with the Mayors of Įlora and Ardales, Josź Sįnchez and Juan Calderón, the County Council President explained the regulations which are to be followed during the visit and the booking. The County Council agreed with Antonio Pascual, president of the electric power company Fundación Sevillana Endesa who was also present, on ornamental lightening with led lights of this natural beauty spot.

Mr Bendodo said: ‘We have finally finished the project that had seemed impossible to carry out for more than twenty years. It has already become real thanks to the County Council sponsorship and the collaboration of other involved institutions’. The web page is going to be available for booking from tomorrow, 24th February, at 12 o’clock on.

There is 6 kilometres distance between two control cabins at the end of each boardwalk in Įlora and Ardales. It we take into account the distance between El Chorro Train Station and the King’s Chair, this distance is 8.5 kilometres. Mr Bendodo recommended visitors to come by train.

As for the public space and safety regulations, visitors will receive a helmet at the entrance to the path. This hiking route is part of active tourism and certain physical effort is required as it takes few hours to get to the aim. The County Council president emphasized: ‘El Caminito del Rey is not dangerous at all, but it is necessary to be careful due to the characteristics of the spot.’

Adults and children under supervision, older than eight, can access the spot. They must come half an hour before the booked entrance time to the selected access point (Ardales or Įlora). It is forbidden to carry children, big bags or backpacks; to light a fire, or to use umbrellas when it rains because the boardwalks are narrow and there is to occupy as less space as possible.

As for the timetable, there are timetables for two different seasons. In winter time, from November 1st to March 31st, El Caminito del Rey Path opens from 10 a.m. to 2 p.m., while, in summer time, from April 1st to October 31st, it is opened until 5 p.m. It closes on Mondays, on December 24th, 25th and 31st, and January 1st, as well as on days with winds of more than 35 km/h.
Apart from individual tickets, from next week on, group visits with no more than 50 people can be planned thanks to the operators specialized in active tourism that co-operate with the County Council.

The path will be able to hold 600 people a day. Fifty people will be able to access the path every half an hour. There will never be more than 400 people on the boardwalks at the same time. All these conditions are written in a Regulation Document that has been approved at a plenary meeting and will be controlled by a Monitoring Committee, which has two members from the County Council, two from Ardales and two from Įlora.

The Mayor of Ardales highlighted the importance of ‘generosity’ of all the involved institutions when it was about creating this project, and he thanked to the County Council for ‘its effort, dedication and efficiency.’ Mr Calderón believes that the path ‘will stimulate the area’s development, above all, in the case of Įlora and Ardales, and the whole province will have benefits out of it.’

The mayor of Įlora stressed that all the institutions involved in the project: ‘have done well. They have refurbished a spectacular area, so that companies can create employment inside the area.’ Mr Sįnchez added that all of them ‘will help small and medium-sized enterprises to increase their profit’, and he informed in advance that his municipality will invest €300,000 for refurbishing El Chorro Train Station.

On the other hand, the Mįlaga County Council and the company Endesa are going to collaborate in the ornamental lightening of El Caminito del Rey Path. Mr Bendodo praised this agreement, and he pointed out that it ‘will make stronger this initiative which is meant to restore one part of the history of the province’, and it will stimulate economic activity in the Guadalhorce Valley area, and especially in the Towns of Ardales and Įlora.

Antonio Pascual reminded everybody that the company Fundación Sevillana Endesa is ‘closely connected to El Caminito del Rey’, considering that its property had once been owned by Hydroelectric Power Station, built at the beginning of the 20th century, which joined power stations, waterfalls of Gaitanejo and el Chorro Dam. These Mįlaga factories were obtained by Endesa Group, which was formerly Sevillana de Electricidad.

Advanced techniques and materials are going to be used for ornamental illumination of the path and the tunnel in Ardales. Likewise, Fundación Sevillana Endesa company will place two bronze walls at each entrance point of the path where its refurbishment will be explained.