20% of the reconstruction of El Caminito del Rey finished. At this pace of work will be possible to anticipate completion

ElÝas Bendodo visits the works that could be finished by the end of the year although, officially, the deadline period is the first quarter of 2015.

The County Council President, the Mayors of Ardales, ┴lora and Antequera and the Environmental Department Representative from the Andalusian Government seem confident that King Felipe VI will officially open the boardwalk. 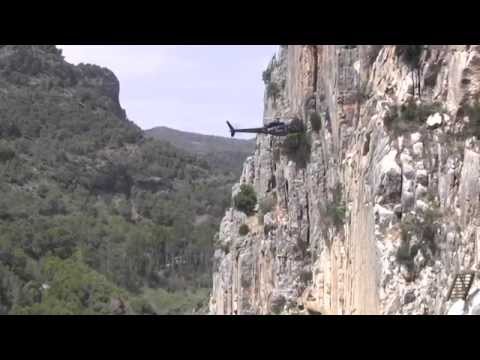 æThe Caminito del Rey refurbishment goes at a fast pace, 20% of works have been completed and the whole project could be finished by the end of yearÆ, said El¯as Bendodo during the visit to the building site at Desfiladero de los Gaitanes.

Mr Bendodo checked development of the works on the boardwalk, which employ helicopters to move materials and take away rubble. Until now, 20t of it were removed. He visited the site with the Mayors of Ardales, ┴lora and Antequera, Juan Calder¾n, JosÛ Sßnchez and Manuel Bar¾n, considering that the trail stretches through these towns.á

The Environmental Department Representative from the Andalusian Government, Javier Carnero also participated in the visit, during which they walked along the new section fixed onto the wall. The County Council President emphasized that the project is æsymbolic and historic for the province of MßlagaÆ and that it was finally successful after decades of failed attempts.

Moreover, he stressed how important institutional co-operation between the County Council (that bears 2,3m euros investment for the works awarded to the company Sando), the Municipalities and the Andalusian Government is and how æit makes this restoration possibleÆ.

He also reminded about tourist and economic importance of the project, considering that active and nature tourism are booming and this will turn El Caminito del Rey into a stimulus for the Guadalhorce Valley. He added that this spot generated 35 m euros for Spanish budget last year.

The County Council of Mßlaga and the three Municipalities requested the presence of Felipe VI, who has been proclaimed King today in Madrid, from the Royal House. He was meant to officially open the boardwalk at the beginning of 2015 in honour of his great-great-grandfather Alfonso XIII, after whom the trail was named El Caminito del Rey (the KingsÆ Little Pathway) in 1921, when the Count of GuadalhorceÆs Reservoir was open. æWe all hope he will accept the invitationÆ, Mr Bendodo said.

Mayors Juan Calder¾n, JosÛ Sßnchez and Manuel Bar¾n all pointed out that this restoration of El Caminito del Rey is a ætraditional demandÆ, and were satisfied the works, which include not only 1.2 kilometres of the boardwalk but also four kilometres long path, were progressing well.

After the meeting with the building company, the County Council President informed that the project was going as planned. Vultures nesting biological stations (one is to be valid until July 1st and the other starts to be it in December) do not affect the project and are being spared.

æThere is to bear in mind that these works are important, symbolic, and required by all the municipalities in the area of Guadalhorce, due to the economical growth they are likely to bring. Of course there are difficulties, such as building materials transport, which has to be done by helicopters, but everything goes as plannedÆ, he explained.

Mr Carnero guaranteed that the Andalusian Government is sure to continue collaborating on projects related to this beauty spot and its access points: æin order to make these surroundings even more attractive.Æ

The works on the reconstruction of El Caminito del Rey started on 13th March, and they follow the technique which was used between 1901 and 1905 by the employees of the Hydroelectric Power Company El Chorro to build the boardwalk. Then, this was a service way which got its name after King Alfonso XIII had walked across it in 1921. Following this method, workers hang on the wall of the gorge in order to install the parts of wood and fix them onto the wall.

The project includes control cabinsÆ positioning at the access points, at the beginning and the end of the route, in order to improve control and assure security of the visitors.